Katahdin:  I’d been up to Katahdin (the highest point in Maine) twice before and swore that I’d never go up again.  When Kevin noted that they recently finished the re-routing of the Abol Slide trail and that he had never been to the summit I knew third time up would be the charm.  The other ascents had been via the longer Hunt Trail and down via the Abol slide trail.  Oddly I enjoyed the Abol slide much more; somehow there was less exposure on the slide than on Hunt.  Go figure!  Our plan was to ascend and descend via the new slide trail that had only recently been opened to the public.  Typically 20,000 per year hike Katahdin and 5,000 of those climb via Abol.  The new section of trail not only means better trail (dirt trail in the woods as opposed to boulders in the open) but also takes the average grade from 38% down to 27%.  The new trail offers views of the Hunt Spur and the Gateway that were not available on the old Slide.  The relocation would add ½ mile to the total distance of the climb.

We were up at 5am and off for our Dunkin’s wake-up coffee.  I was a bit stiff from the long run (18m) the day before but no major issues.  We got to the gate at a little before the 6am opening time and were about 20th in line.  We had our parking reservation at Abol so no worries about getting in.  The rangers were efficient and courteous (unlike some previous interactions I’ve had).  We signed in at the ranger station and were off on our run at 6:45am.  Temps were in the low 60’s and on top it was 50 degrees with a little bit of high clouds and just about no wind.  It was a perfect morning for a climb.  A dozen hikers had started before us on the trail (the earliest at 5am), since this was the shortest route we thought there was a chance we’d have the summit to ourselves.
Off we went from the Tote Road enjoying the easy trail for the first half mile (1295’ to 1520’), the footing was also very good as we shook off the rust from yesterday.  We hit the mile in a bit over 16 minutes (1900’) for the ‘easiest’ mile of the day.  At 1.5 miles (30 minutes) we reached the 2,500’ mark and the relocation of the trail. 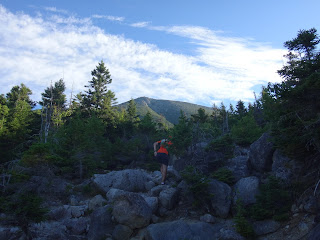 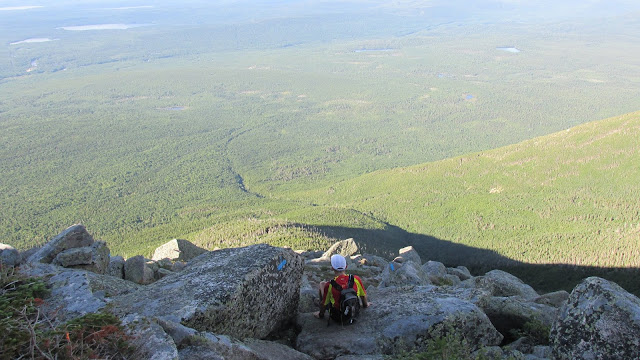 The Tableland was fantastic!  We had a great view all around us and the summit stood out a mere 1.1 miles (and 600’ of climb) away. 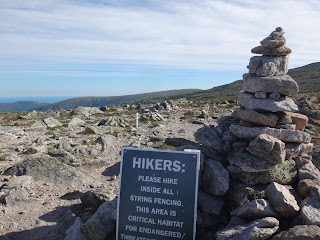 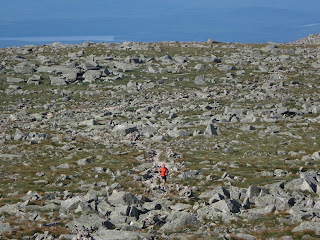 Twenty-one minutes of pleasant running and we reached the highest point in Maine (1:42:00).  We spent the next 18 minutes (I like round numbers and wanted us to head down at 2 hours on the watch) having a drink, eating a bar, and chatting with the thru-hiker who had finished his trek on the Appalachian trail a few moments before we arrived.  We had some amazing views although the horizon was a bit hazy.  I took a closer look at the Knife edge which just looked absolutely insane.  I would never do that. 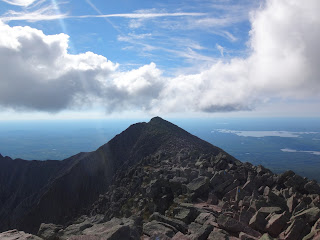 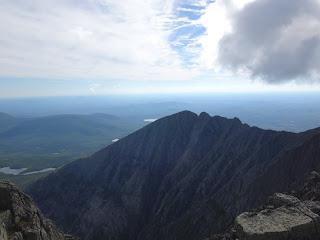 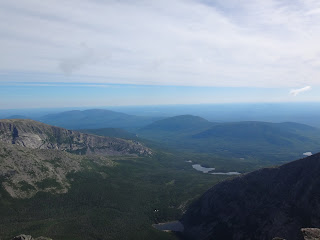 The run down was uneventful, we chatted with a lot of people coming up.  One guy noted as Kevin bounded down some rocks “I get it, you really are a Mountain Goat”.  He had seen Kevin’s license place (MT&GOAT).  We weren’t in any rush so we did spend a few minutes moving aside for groups heading up and chatting with them a bit.  We still managed to come down a bit faster than we’d ascended, reaching the road in 3:37:35 (so our run down took 1:37:35) for the 8.1 miles with 4,000’ of climb and descent.  Since this is a new version of the trail we may have the Fastest Known Time (FKT).  I bet Ben Nephew (or even Kevin without me in tow) could do this in under 2.5 hours!