Mexico
CMS teammate Al Bernier and I have been hiking together since 2005.  Al bagged nearly a thousand peaks in 2015 alone as he is working his way through numerous peak lists?  Since 2005 I’ve done just over 1,100 peaks but a lot of those were just little hills.  Over the years Al and I have done some interesting hikes together including some really difficult bushwhacks (no trail, just pushing through the woods).  It is usually a new adventure when I hike with Al.  A few months back we were visiting some peaks and he mentioned a trip to Mexico for some truly high peaks.  I immediately said I was interested but noted my concerns about my hiking weaknesses.
Al felt none of the peaks were outside of my abilities.  I’d need to buy some gear I was lacking and hoped to take a winter hiking course.  My strength is steady climbing; I’m a pretty strong climber.  My weaknesses are a major fear of exposure (falling off ledges to my death) and no steep snow climbing history (I’ve used running Kahtoola’s but never real crampons and certainly never used a climbing ax).  I left all of the planning to Al as I felt this was his trip and I was along for the fun.  I was up front that if I didn’t feel comfortable with the peak I’d just descend.  Unfortunately we never got any snow in New England so I did get to take a climbing class.  I also didn’t get to test out my new winter gear on Christmas weekend as temperatures soared to the 60’s.
My one plan for the trip was to get 4 miles of running in every day no matter what.  On January 8 I got up at 3:30 am to get in my run before we headed to the airport.  It looked like we might not make it when I jokingly asked Al “got your passport?” which he did not!  We got to Logan airport with about an hour to go before our flight.  We spent most of the day flying to Houston then to Mexico City.  It took a long time to navigate in the city but eventually we located the outfitter which sold fuel for Al’s stove.  It took an even longer time to get to our hotel but eventually we got there and called it a day.
Day 1 in Mexico (01/09) – Al joined me
for a 4 mile run from the Ones Hotel to the nice trail around the park near the University of Mexico.  At 7,500’I could definitely feel my lungs gasping for air even though we took it pretty easy. 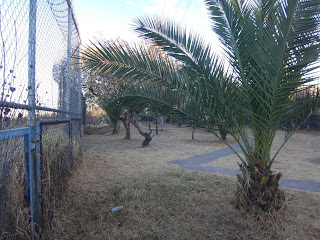 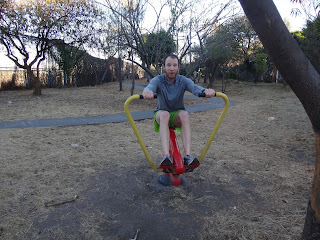 After breakfast we headed to Ajusco (13,077’) for our first climb of the trip.  We parked at the TrailHead at about 10,800’ and headed across the rickety “Indiana Jones” type bridge. 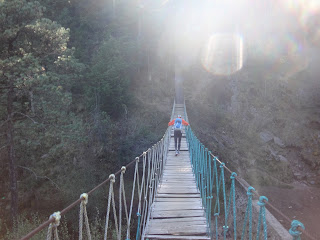 The climb was steep and with temps in the 60’s and bright sun we were sweating and huffing/puffing our way up.  About 2.2 miles and 2,000’ of climb later we were on top with great views of the surrounding countryside.  It took us 1:55 for the climb and we spent 20 minutes on top. 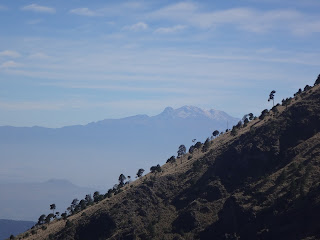 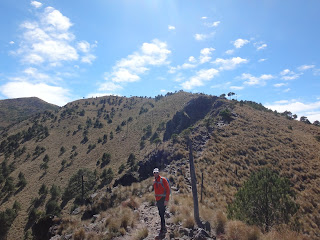 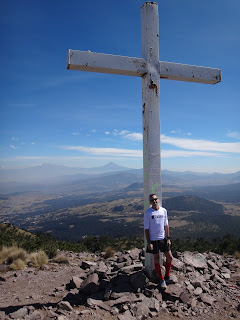 I was feeling a bit dizzy and sick and had a headache that I hoped was part of the sinus infection I was still struggling with.  We dropped down a three hundred feet into the col then climbed up the sub-peak.  Al wanted to descend this way but I found it a lot more exposed than I care for so we went back to the col then did ½ mile of traverse before hooking up with the trail we’d come up on.  At this point I sat down and gave in to the dizziness,  I had nothing to puke but did so anyway.  It didn’t make me feel any better. 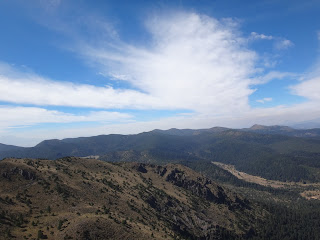 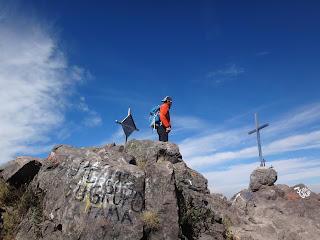 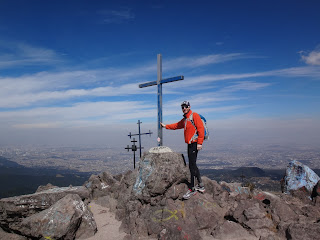 We continued down reaching the parking lot in 4:49:02 for the 4.98 miles.  I felt terrible and just kept my eyes closed during the long drive to Toluca.  We had trouble getting into our hotel and didn’t get to bed until well after 11 pm, which made for a long day.
at January 21, 2016

Thanks for the beginning of your trip and the great pictures! Hope you felt better after your first day!?