One more workout before the New England championships.  Goal was 4x440 at about my HOPED for mile pace.  2m warm-up then 2x440 (can't do strides on the treadmill).  Decided for this workout I would keep the rest pace fast (very fast for me).  My last bunch of workouts, I'd dropped from 8 minute pace for rest to 7:30's.  For this one I got down to 7:00 pace.  Definitely not enough to really recover.  My three miles during the workout (the first being the strides replacement) were 6:27, 6:10, and 6:05.  I'm seeded at 5:25 but hoping to get under that.  I did a 5:32 in a workout last week dammit!

My ankle was not feeling great after the off road footing, but I decided to do a track workout (on the treadmill) mid-week.  The workout went better than expected and my ankle was no worse for the wear. Then the Indoor Insanity 5k sent out a discount code for ½ off the entry fee.  I could not resist.  I had last done the Indoor Insanity race in 2018 when it was at the Bates track.  I had not raced in Maine since then.  I like the event as it is an indoor track race but not during an indoor track MEET.  There would be three heats of the 5k with the fastest heat (15-20 minutes) starting at 8 a.m.  That is a good time of day for me and knowing the race would start at 8 and I wouldn’t be worrying about how long other events were taking certainly takes the pressure off.  My goal was to run 6:00 pace (45 seconds per lap), which based on my recent efforts would be a solid run although back in December I’d managed nearly 6 miles at 6’s.  Not sure why I’m struggling recently.

My day started off on a high note when the guy at Irving (Circle-K) told me my large coffee was free.  The 90 minute drive to Gorham Maine went by quickly.  It was 6 degrees when I arrived, I was glad to be running indoors!  I got my number, winter hat, and spike bag and it was time to hit the track for a warm-up.  When I started (7:10 a.m.) there was no one else on the track.  A couple of guys jumped in as I was finishing my three miles.  Only six guys had signed up for the first heat which is too bad, they do a really nice job but for whatever reason it is hard to get people to race on the indoor track (outside of big track meets).  The temperature was ideal on the track although as usual the air was very dry.  I hydrated and changed into flats before getting in another mile with some strides.  Then it was time to get going.  I didn’t feel very sharp and convinced myself that whatever the first 200 meters was, that’d be the time I’d aim to hold for the entire race (with the hope it’d be 45 seconds). 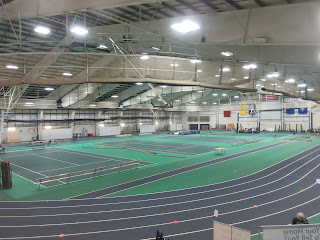 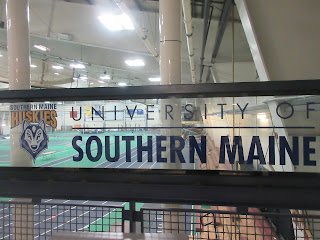 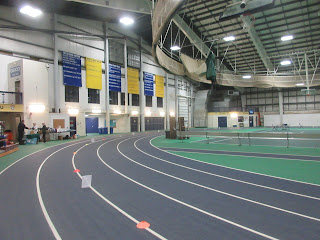 Highway View Farm - Snow or no, we go

Last year I was fortunate enough to win the Canterbury XC race series and the prize was free entry to the "Snow or no, we go" series.  This five race series takes place at a few locations near Canterbury (2 at the Shaker Village).  Thank you to the Raffio's for putting on this series and for the freebie!  As the name indicates these races are held no matter what the conditions are.  Hopefully some will be snowshoe races (which is the primary thinking behind the series) but with the lack of snow and 50 degree weather (with heavy rain) the last couple of days there was no doubt this would be a trail race.

I wasn't sure about doing the race as my ankle has been feeling pretty lousy and the idea of uneven running had me concerned.  I started feeling pretty good late in the week, with a quick treadmill run on Thursday and a fast outside run on Friday.  After that I figured I'd just give it a shot.  The only goal would be to not get hurt, anything else would be a bonus.

I was one of the first to arrive, but the tent was set up and I quickly got my number.  Bumped into Tom Raffio who seemed pretty fired up about the race, a lot of positive energy!  I put on micro-spikes and headed out onto the course.  The dirt road to the cornfield was very icy (and had a big puddle about 50 meters into the course) and then I dipped down to the cornfield.  It was also very icy but mostly just icy crust.  Unfortunately, under the crust was a lot of water.  My feet were soak by 1/2 mile.  I'm glad I checked out the course as there were opportunities to avoid the worst of the puddles if you paid attention.  It was 30 degrees and snowing a bit but not terrible out there, the wind was a bit chilling.  I completed the 2 mile loop and chose to run back to the finish (to see how long one loop was, it was 2.35 miles) instead of continuing around again for the four mile course.  I did an out/back on the Northern Rail Trail (solid ice) as an add on to get in a four mile warm up.

I quickly changed into race gear (shorts and longsleeve with Delta Dental Singlet) and had enough time to put in another half-mile.  I chose to go with Inov-8 trail shoes with the micro-spikes.  It looked like a good turnout with maybe 50 doing either the 2+ mile or the 4+ mile course.  Kara Haas looked to be the main competition (she nearly beat me at the Millennium Mile).  We chatted briefly and her goal was the same as mine...don't get hurt!

Off we went, and one of the Prospect Acres Obstacle Course runners took it out.  It felt quick to me and I was in no rush, figuring I could always try to push it on the second lap.  I took the lead at 1/4 mile in and after 1/2 mile couldn't hear any pursuers.  I checked my watch every half mile and was happy with the effort and how even my splits were.  I started lapping runners by my second time around but found the second lap a bit tougher as my feet were really wet and that did not help with traction.  I looked back once as I turned into the cornfield and could see Kara just ahead of the guy who took it out.  The cornfield part was very rough so I returned my concentration to watching my footing.  It felt like I was giving a good effort, I was wheezing which meant I was pushing pretty hard.

I hit four miles in 27:25 and battled a 2 mile runner right to the finish.  I had just enough time to hightail it to my car and grab my camera to get the next 3 runners coming in.  After that, Kara joined me for a 2.4 mile warm-down ON THE ROAD.  Kara may have talked me into doing the USATF NE masters mile at the end of the month since it is part of the All-Terrain Series.  Time will tell. 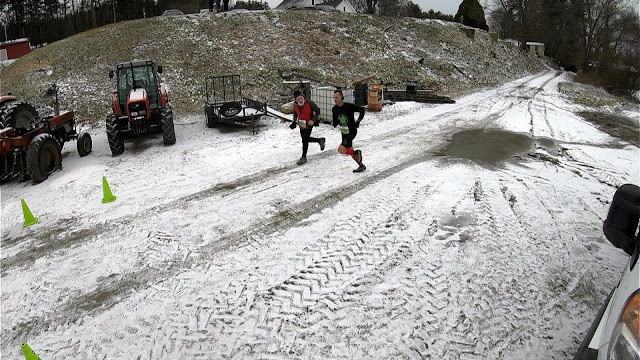 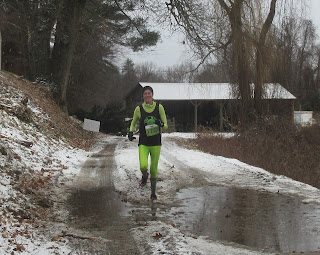 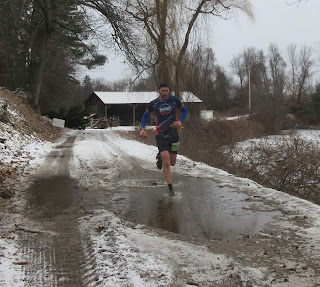 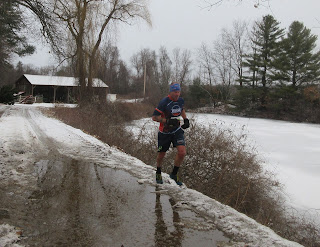 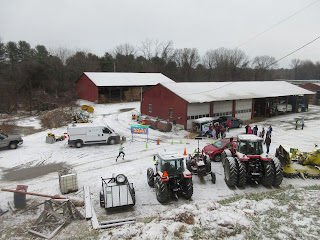 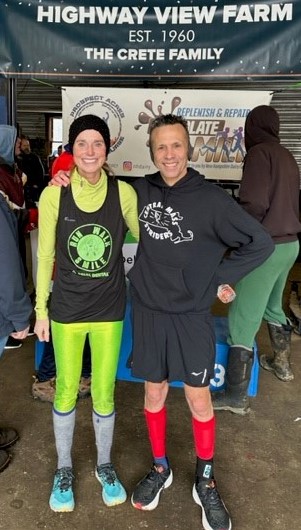 My first win in each year:

45 years with at least one win.  Here are the first wins in each year: